NRI Hindus rally against Jihad in India at Indian Consulate in New York. “SAVE INDIA FROM ISLAM”

SEP 3,  2012
This report is courtesy of The blog site, Vivek Jyoti.  I was at the demonstration along with my colleagues representing Vishwa Hindu Parishad of America. I will write about it later.
Gaurang Vaishnav

Sept. 2, 2012. From their flyer, the reason for this rally is to protest the Indian Congress that is Anti-Hindu and Pro- Islam. “Save the Tribal Indians. Save the Hindus. Kick out Congress.” Not all of the chants were in English, but did manage to catch “Say NO to Sharia Law” There was also a “Charge Sheet against the Congress Govt. of India” that was handed out to the passersby. The organizers were The Indian American Intellectuals Forum; Vishwa Hindu Parishad of America; Hindu Human Rights Watch and Indian Heritage Foundation of Lansing, Michigan. There was very small rally in opposition to this rally that was supporting the Indian Congress.

A  “Charge Sheet against the Congress Govt. of India”

“Save the Tribal Indians. Save the Hindus”. Kick out Congress.”

Short video of the chants (not all were in English,) but did manage to catch “Say NO to Sharia Law”

A very small rally in opposition was supporting the Indian Congress. An anti-Hindu counter-protest preaching ‘peace’ by forming an alliance with the “Religion of Peace”… aka Islam… and ignoring the victims cries for help.

But, the Hindu victims are NOT being ignored as these signs made very  clear.

“HUMAN RIGHTS FOR ALL! NO TO SHARIA LAW in US OR INDIA!”

A boisterous Protest by 100 strong Indian American Hindus was organized by Indian American Intellectuals Forum in New York September 2nd near Indian Consulate to express their repugnance and  revulsion against  burning of Hindu villages by Bangladeshi Muslims in collusion with Muslims from Assam and West Bengal and making thousands of  Hindus (Bodos) refugees in their own country.

The Protesters said that India is in danger.  After Kashmir Radical Islam is taking over Assam in the North East.  Jihad is spreading far and wide.

The Protesters also expressed their abhorrence at the inaction and apathy on the part of Government of India in handling the riots in Mumbai by 50,000 Muslims, who, armed with petrol cans and plastic bottles, hockey sticks, iron rods, damaged the police vans,  stole their guns and ammunition, injured more than 50  policemen, molested the policewomen, burnt the City’s transport system, smashed journalists’ TV cameras, vandalized War Memorial and held the entire Mumbai City to ransom, in the broad day light.

The Protesters held responsible the ruling Congress Government of India for  not taking stern action against Kashmiri Muslim militants who fought pitched battles with India’s security forces in the month of Ramadan, chopped of one Hindu teacher’s hand in Rajasthan, killed one Hindu boy in Kerala, attacked TV journalists in Lucknow,  did not allow Hindus to celebrate the Birth Day of Lord Krishana (Janamashthami) in Ranchi, and in cooperation with Pakistani Muslims sent thousands of SMS messages to North East residents in Bengaluru,  Pune, and Hyderabad and threatened them to leave these cities otherwise they would be killed.

Instead of punishing the perpetrators of the above mentioned crimes, Congress Government banned Hindu websites, facebook and twitter.

The Protesters also blamed the Congress Party of Sonia Gandhi for taking income from Hindu temples and giving it to Muslims to build mosques, run Madrassas and go to Mecca for Haj.

Every month 20-25 Hindu girls are abducted by Muslims, forcibly converted to Islam and married to Muslim men.  The Congress  Government is doing nothing to ameliorate the miserable plight of these unfortunate girls.

Half a million Kashmiri Hindus have been ethnically cleansed from the  Kashmir Valley, but the Government of India is taking no action to resettle them back in the Valley.

Infiltration by Bangladeshi Muslims tantamount to an invasion of India by foreigners sponsored by Congress Party, Communist Party and supported by Jihadists in Assam and West Bengal.  The aim of this  insidious  design is to keep Congress in power and help Muslims to Islamize India.

Mr. Tathagata Roy, an erudite scholar and  former Prof. of Engineering and former President of BJP, West Bengal who was on a visit to New York was surprised to see so many Hindus protesting against Islamization of Assam and appreciated their vigor  and vitality.

The Protest was supported by Mr. Gaurang Vaishanav of  Vishwa Hindu Parishad of America,  Mr. Satya Dosapati of Hindu Human Rights Watch, Dr. Kumar Arun of India Heritage Foundation, Lansing, Michigan and Panun Kashmir International.   The unique feature of this Protest was that it was supported by non-Hindu American groups such as “Stop Islamization of America” of Pamela Geller, “Human Rights Coalition Against Radical Islam” of Dr. Marvin Belsky, “The United West”  of Mr. Stuard Kaufman,LogansWarning@hotmail.com and several other groups.

A copy of the Memorandum addressed to the Prime Minister of India, Shri Manmohan Singh was sent by email to the Consul General of India.  It will be formally sent to him by Certified Mail, Return Receipt Requested today. 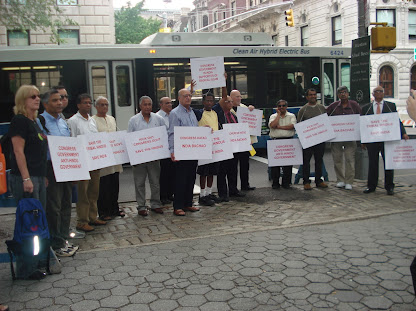 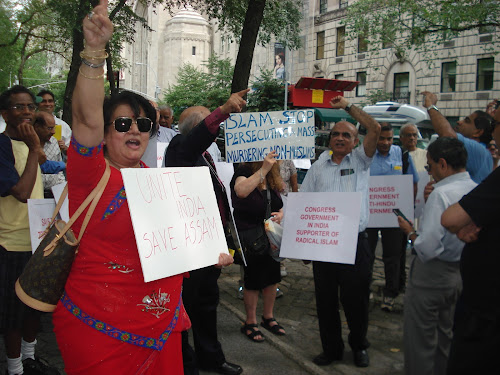 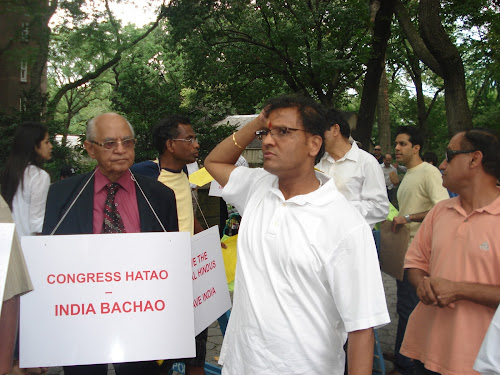 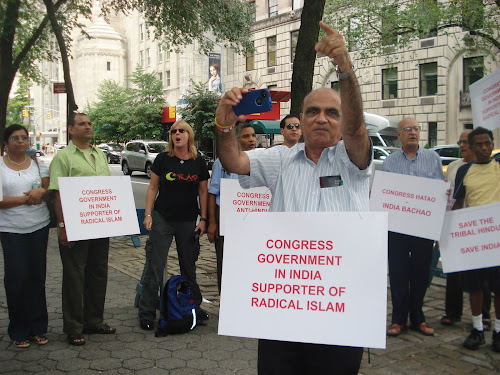 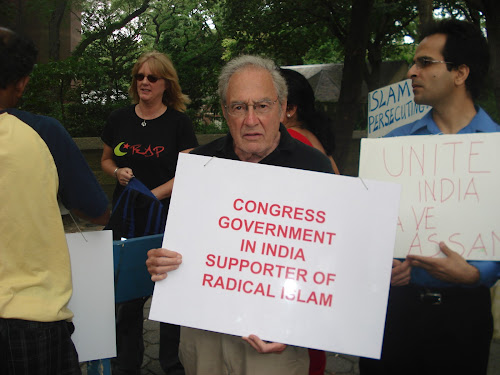 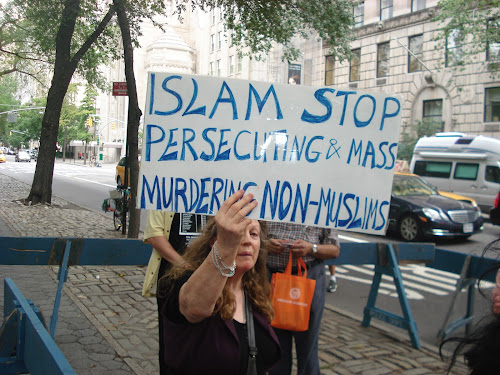 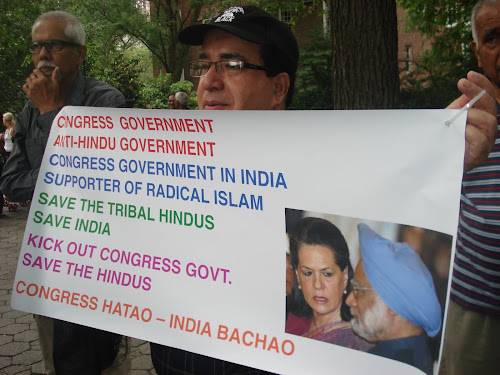 Link to PICTORIAL ALBUM (76 photos of the Protest)

Gwalior, February 10, 2012
In an election public meeting in Azamgad- Uttar Pradesh, the Union Minister of Law Salman Khursheed has crossed all limits in his constant endeavour to offend the majority of Bharat. Criticizing Salman Khursheed’s remarks about Batla House encounter, Dr Pravin Togadia, International Working President of VHP said, “Salman Khursheed claims that the encounter was fake, the govt was going to take action against it but kept quiet due to election & Sonia Gandhi’s eyes were full of tears seeing the photographs of the encounter etc. To win Azamgad seat & dreaming of winning Uttar Pradesh election to save Rahul Gandhi’s image, people like Salman Khursheed are going to the extent of offending Bharat, our brave Army & Police. The PM cries seeing pregnant wife of Dr Haneef who was caught by Australia, PM also cries & begs to Kuwait when a Muslim man is punished with removal of his eyes per their own law, now Khursheed claims that Sonia Gandhi cried seeing dead Jehadis in Batla House encounter! Tears of the Govt representatives flow freely only for Muslims & never for Sanaatani Hindus, Sikhs, Jains, Buddhists, Tribals, OBCs, SCs & others! Neither PM, nor Soniaji nor Salman Khursheed or anyone ever cried for the thousands of army men & police killed at the hands of Jehadis in Kashmir, Assam, Mumbai, Delhi or at the hands of Naxals!
Now the time has come for all patriotic & truly nationalist citizens of Bharat to democratically stand up against such anti-national remarks & actions – be it elections or by democratic agitations. The same Salman Khursheed – Bharat’s sitting Law minister promised in his wife’s election campaign 9% snatching from OBC quota for Muslims & now like a serial offender he again insults Bharat & the late police officer who was rewarded for his bravery in Batla house for the same encounter. If Salman Khursheed, as a Law Minister is against his own Govt’s decision that the Batla House encounter was a brave deed by the police, then he has no right to be in the govt neither as a Law Minister nor even as an M.P. of Bharat. Those who have any sympathy towards Jehadis have no place in the democracy. Thousands of innocent Indians were brutally killed & maimed by Jehadi attacks from Delhi to Mumbai & Bengaluru to many places. But neither Salman Khursheed nor his superiors shown any sympathy for the victims, instead, they are siding with the Jehadis! After a conspiracy to snatch all castes’ Hindus’ Roti, Education, Employment, Bank Loans to be given to Muslims, now the govt is systematically moving towards persecuting majority of Bharat to appease Muslims. Muslim League did the same at the independence time & Bharat was forced into partition. Now this entire ‘I am with Jehadis; NOT with Bharat’ gang is breaking Bharat again. VHP condemns all these efforts & appeals all to protest against this behaviour democratically
For information, contact: drtogadia@gmail.com ; 098253 23406