A Tribute to Shammi Kapoor, the Spirited Actor 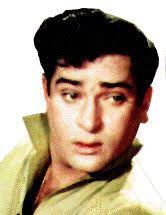 Shammi Kapoor, the actor nicknamed Elvis Presley of Bharat  died on early Sunday (August 14) morning in Mumbai. Though kidney failure had taken toll on his health in last few years he was always jovial and upbeat.

Those who grew up with him, watching light-hearted films like ‘Tumsa Nahi Dekha’, ‘Professor’, ‘An Evening in Paris’,’Kashmir ki Kali’, ‘Rajkumar’, ‘Singapore’, ‘China Town’,’Laat Saheb’, ‘Janwar’, etc., will agree that there has been none who could match his style, exuberance and body movements. One wondered, if he had springs in all parts of his body.

I did not have a chance to watch his acclaimed films  ‘Badtameez’, ‘Bluff Master’ and ‘Teesri Manzil’ but two of his outstanding roles were in ‘Brahmchari’ and ‘Pagla Kahinka’. parts of Brahmchari were copied in Sridevi-Anil Kapur-Amrish Puri  starrer ‘Mr. India.’ Personally, I found Shammi Kapoor at his best in ‘Pagla Kanhika’.  As a person who fakes being insane to escape being framed for a murder and then really losing his mental balance on loss of his beloved, he was superb. No one could imagine that Shammi who was known for prancing around trees and serenading his heroines with lilting melodies of Rafi saheb  could draw deep from within the reservoir of emotions and give a tear jerking performance in ‘Pagla Kanhika’.

Very few people know that when personal computers were infancy in Bharat, Shammi Kapoor founded and was chairman of Internet Users Community of India (IUCI).

He was a devout person who visited famous Ambaji shrine in Gujarat often. After losing his actress wife Geeta Bali to smallpox only within 10 years of marriage, he married Neela Gohil of a princely family from Bhavanagar, Gujarat.

With the passing away of Shammi Kapoor at age 79, an era of conscientious, disciplined and caring celebrities has come to an end. Kapoor family has lost a father figure who always held the vast family together. Just the way he remained popular even after retiring as a lead actor in 1971, he will continue to remain in the hearts of millions.

(You won’t be able to forget me that easily; whenever you would listen to my songs, you would hum them along.)

May Shammiji’s soul rest in peace and move on towards ultimate destination of Nirvana.