So, TOI has no Shame for spreading lies about Modi

Bangalore, July 14: The manner in which the media has twisted Narendra Modi’s comments in a recent interview to Reuters are a good example of how Media creates controversies around Narendra Modi and then goes on milk those controversies for weeks to generate traffic, eyeballs and TRPs.

The media reporting on Narendra Modi’s visit to Uttarakhand last month was no different when that visit was turned into a controversy for weeks thanks to a report in the Times of India on 23rd June. 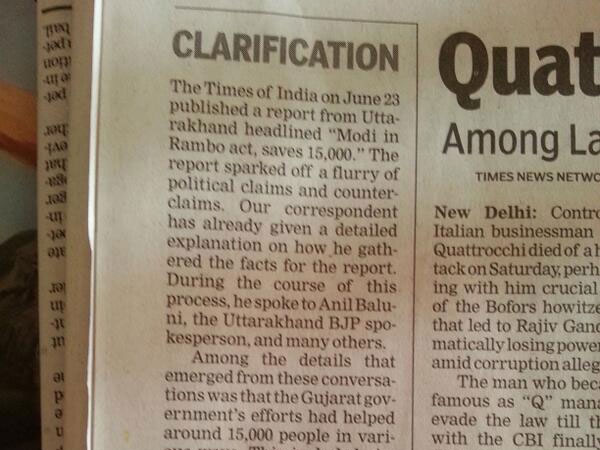 It now turns out that the Times of India report of 23rd June attributing claims to Narendra Modi was a false and mischevious report. The Times of India has now belatedly issued a lame clarification almost 3 weeks after the fact.

The clarification also admits that all the exaggeration in that report was due to Times of India. The clarification makes it clear that neither did Narendra Modi, nor did the Gujarat Government have anything to do with the mischevious report.

It is shocking that the Times of India filed such an irresponsible report without checking with Narendra Modi or Government of Gujarat. It is also mischevious that the Times of India milked the controversy for so many weeks by allowing the Congress Party and other anti-Modi elements to take advantage of this report to write slanderous and defamatory columns as well as run a motivated campaign in Social Media.

This lame excuse by Times of India coming 3 weeks after the damage was done is a case of doing too little too late.

The Supreme Court has not indicted Modi and his government in the Gulbarg Society case-The SC refused to pass any order on Modi’s involvement in the 2002 riots. The SC has referred the case to the trial court  saying that it need not monitor the case any longer and has directed the Special Investigation  Team  to file a final report with the magistrate court concerned, which will henceforth deal with the findings as per law. This has given a chance for Modi bashers-the Congress  the Left parties and the NGOs to do what they are accustomed to do. Even though the SC has not indicted Modi and does not find his involvement  in the Gulbarg case the Congress ,the Left and Teesta find Modi accused and want him convicted. The media has also lapped up their views because as far as Modi is concerned, the media has always been anti-Modi. Hence it puts Modi on trial. If the TOI splashes ‘SC breather, Modi exhales’ Ram Jethmalini demolishes it by stating that ‘Narendra Modi can’t get a breather because he was never suffocated. There was never any evidence against him. It is a vindication of his innocence’. The media also whips up passions and polarizes opinions when it brings in at this juncture the idea of Modi as prospective PM candidate. Even Modi may not have given a thought to it. He is full of Gujarat and its development. May be his admirers had on various occasions articulated such a proposition. Only goes to show the stuff he is made of. It speaks of his caliber as an able administrator, as a dedicated CM,  as one who spares no effort and stands out as a non-corrupt and incorruptible person.
The media goes further to analyze who are Modi supporters-who are the fence sitters and who are wary of Modi in the BJP. This kind of uncalled for expose will not be done say in the case of Rahul Gandhi, who is projected as the crown prince. Will the media tell us who his supporters are in the Congress-who are the fence sitters and who are wary of RG? The media has a very crucial role to play in a democracy it must play fair-project the truth and nothing but the truth. It cannot play politics. So what is apparent is that the media is terribly biased against Modi.According to Abhishek Manu Singhvi the SC has not given Modi a clean chit-it has left everything open for the magistrate to look into all aspects. And Salman Kurshid wants us to believe that the BJP is privy to court documents and hence is claiming Modi to be innocent. So one has to believe by these utterances that the SC did not look into the case at all and has simply referred the case to the trial court. The media of course uses this as an opportunity to put Modi on trial. No body thinks that the whole case is sub-judice and hence apart from giving out the SC’s verdict they cannot discuss it thread bare and give their own judgements. The Congress spokespersons in other cases like the CWG scam-the Adarsh scam the 2-G spectrum scam et al excused themselves from commenting because these are sub-judice. But in Modi’s case they are ready to pronounce him guilty as the media runs the trial. The bias is so obvious. What is the reason-just vote bank politics.

It was not long ago that P.Chidambaram appealed to the Sikh community to put the massacre of the Sikhs at rest and to move forward. This when 100 times more persons of the minority community were massacred-brutalized, raped and killed. Time to move on was his appeal. But when it comes to the Gujarat riots it has to be fixed at that riot incident-Time and again it has been used against Modi. Come elections the NGOs canvass with the CDs of the riots-the wailing and the weeping of the victims and their relatives must be kept ever fresh. Why this double standard? Did the Congress leaders not lead the massacre brigade and supervise the killings of the Sikhs? Did not the Delhi government abet it by silently watching the burning and the killings? Did not Rajiv Gandhi justify this? So what moral right has the Congress to fault Modi and his government? It must be also noted that this is not the first time Gujarat witnessed riots-not only Gujarat but all over India there have been any number of riots. No one person has been maligned as Modi has been.

Vote bank politics has marred every single perception and action of the UPA government. There have been 7 attacks since 2010 after P. Chidambaram became the Home Minister. The Sept 7th bomb blast at gate 5 of the Delhi High court is the 8th attack. This left 13 dead and 88 injured. PC has suddenly become color blind. He who was so obsessed with ‘saffron’ terror suddenly finds just these as terror attacks and is quick also in his briefing to Parliament to caution the country of Naxal terror. No lessons learned. The issue before him is Islamic terror and he is afraid even to term it so. It becomes just terror. And our PM joins in the chorus to mouth hollow words that the perpetrators would be punished. In which terror attack has the perpetrators been punished may we know? So why mouth such promises?

Rahul Gandhi goes to visit the victims of the Sept High court bomb blast at the RML hospital. He has forgotten to think because he had earlier stated after his famous draft reading in Parliament that he took so long to react to the LokPal bill because he had to think. Well one does not know if to read a draft one has to put on the thinking cap and take such a long period of thinking. When he visited the hospital he did not utter a single word. Either he forgot to put his thinking cap on or there were no draft writers by his side. Can this crown prince not spontaneously offer a few words of comfort and listen to the anguish of the grieving victims. And we are promised that this youth icon will bring in much desired change.

This brings up corruption. The Congress advises the rest not to politicize corruption. The same song it sings for every issue ‘Don’t politicize terror attacks’-‘don’t politicize corruption is the litany the Congress leaders chorus. But there is politics in corruption. It is the vested interest of the politicians that gave birth to corruption. It is the greed for power that makes the politicians abet corruption and it is the attraction to status and power that makes the politicians to sell his/her conscience and become corrupt. In the process they corrupt others too. And as long as the Congress is the mother head of corruption one cannot expect the Congress to fight corruption. It is now blatantly stated in the emails which are circulated that “Mrs Sonia Gandhi, the most powerful woman is the most corrupt”. It is not just only one person nay the family too. No wonder it is also said that it took 100 years for  Tata to become a billionaire, it took 50 years for Ambani to become a billionaire but it has taken only ten years for Robert Vadra to become a billionaire. From where does this money for chartered planes-treatment in the USA-special facility apartment there et al and lavish spending come from? So it is understandable when one is so filthy rich that Mrs Priyanka Vadra can toss her head and order her two storied house in Himachal Pradesh to be razed to the ground. A new site to be bought and new house to be built. A house in which crores and crores would have been spent is just to be demolished because it did not suit the environment and her fancy. All this after she had been supervising and instructing while the construction was on. Did she not know what materials were used for it? This I narrate only as an example of the arrogance of money power. No second thoughts .We see children by the seaside kick the sand castles and built new ones according to their whims. The same kind of attitude and mindset was displayed by Mrs Vadra which is a dangerous streak and exhibits a disdain for loss of money and labor. The mention of this is also meant to prove that Rahul Gandhi’s multi prong strategy to fight corruption is a farce and mere rhetoric. He has to clean up his own household first.

We had Chidambaram the other day stating that communalizing violence is dangerous. We are no fools and we know what made PC make such a statement. This government will not fight terrorism because it will not embarrass the Muslims. This is clear in it bringing up the Communal violence bill which just will not fight communalism but abets communalism. First the National Advisory Council had no business to draft such a bill. The NAC which is an unconstitutional body acts as a super cabinet and a mini Parliament. This was meant to give a cabinet ranking to Mrs. Sonia and legitimize her face in all the GOI advertisements. Second it has also all Modi bashers and baiters as members. It has a hidden agenda and is biased. Hence the communal violence bill is pro minority and anti majority. How can it fight communalism when the very premise of it abets communalism?